The Alliance recently co-sponsored a VDMA event to matchmake between EU equipment suppliers and PV manufacturers expanding in the US.

US government calls for continued tariffs on solar imports

A new US government ruling is a mistake that the solar industry will have to deal with for the next several years, according to a solar trade group CEO.

The ruling is a mistake that the solar industry will have to deal with for the next several years, according to a solar trade group CEO.

A new interactive tool aims to showcase the solar industry's manufacturing capacity outside of China, which currently dominates most supply chains, and has been subject to trade disputes and forced labor concerns.

Tellurium is used to make solar panels—an important clean energy source—but mining it in China is decidedly not.

The US solar industry has a supply problem

Michael was interviewed by Kelsey Tamborrino of Politico about the Uyghur Forced Labor Prevention Act. He was quoted in two POLITICO newsletters, including Morning Energy.

Solar is one of the cleanest power sources we’ve got. But it could be even greener.

This piece explores the ongoing efforts to make polysilicon production cleaner, including from Alliance members.

Securing a better solar supply chain, one purchase at a time.

Solar energy had a bumpy ride in 2021

Executive Director Michael Parr is quoted: "We are seeing a supply chain realignment.”

Supply chains, Sustainability and Solar Energy: A roadmap to a better future

Fixing Our Supply Chains Is Necessary For the Clean Energy Transition

Check out this upcoming webinar by the Global Electronics Council and the Renewable Energy Buyers Alliance (REBA) about using ecolabels to facilitate purchasing solar panels from decarbonized supply chains.

Behind the Rise of U.S. Solar Power, a Mountain of Chinese Coal

Matthew Dalton writes about why not all solar panels are created equal.

If the solar industry is going to continue to thrive, it needs transparency and sustainability throughout its supply chain.

The Case for Taking Back Solar

Installing a lot more solar is part of the path to clean, renewable energy. But we also need to be producing the entire supply chain.

The Alliance Statement regarding the Congressional Hearing on H.R. 1512 The CLEAN Future Act

The Ultra Low-Carbon Solar Alliance has submitted the following statement about the CLEAN Future Act. 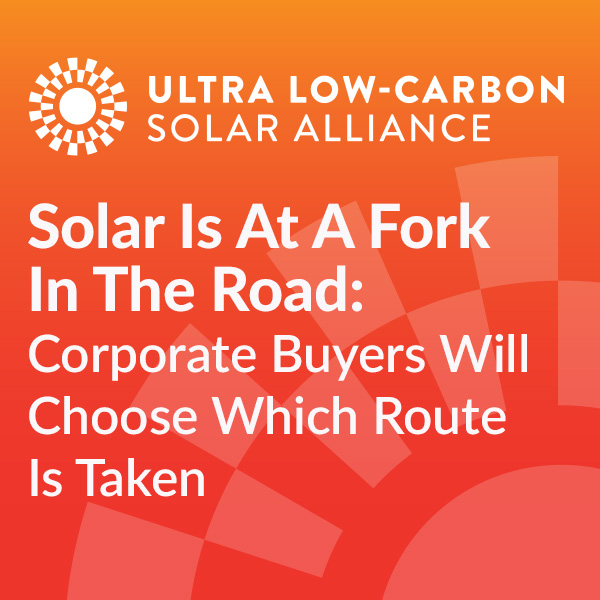 Alliance Authors a Second White Paper, "Solar Is At A Fork In The Road"

The Alliance released a new white paper which highlights the role corporate solar purchasers will play in the future of embodied carbon in solar panels. 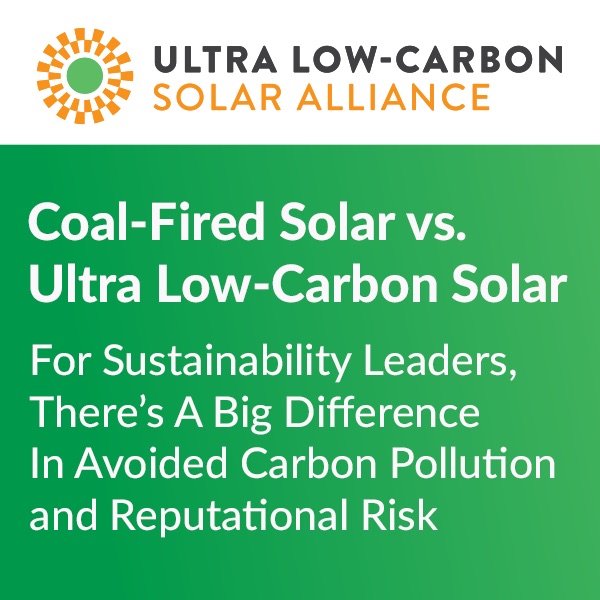 The Alliance just released a new white paper detailing the clear differences between Ultra Low-Carbon Solar and coal-fired alternatives, and reputational risks that the latter pose to corporate buyers.

Small polysilicon producer REC Solar Norway has claimed a carbon footprint of 11.2kg CO2-eq per kg silicon, which was verified by EPD Norway and published Environmental Product Declarations (EPDs) for solar grade silicon and for multicrystalline silicon blocks made by REC.

Michael Parr of the Ultra Low-Carbon Solar Alliance said that excess production capacity in the U.S. and EU could support a call for a supply chain shift.

Alliance member NorSun has received the first ever EPD certifying a low CO2 footprint for their mono-crystalline silicon wafers.

California can lead the nation in making solar energy even cleaner

As California decarbonizes its grid and transportation, it can also decarbonize the industrial supply chain for solar energy.

The Alliance Statement on Forced Labor in the Solar Supply Chain

The Ultra Low-Carbon Solar Alliance has the following message in response to the recent New York Times article regarding forced labor in the solar supply chain.

Not all solar panels are created equal, according to the Ultra Low-Carbon Solar Alliance

As the world accelerates towards decreasing carbon emissions, so too should the solar industry’s supply chain. This was the idea that has led to the founding of the Ultra Low-Carbon Solar Alliance, which officially launched today.

The regulations will come into force on June 15 and will entail panel carbon footprints being calculated according to life cycle assessments of their environmental impacts according to the KS I ISO 14040 Korean standard.

Today’s edition of the Official Journal of the French Republic featured two long-awaited decrees: One concerning the multi-year energy program and another on national carbon budgets and the state’s low-carbon strategy.