Last Friday, the Ultra Low-Carbon Solar Alliance submitted comments to the French government supporting the country’s successful program to reduce embodied carbon in solar projects. You can see those comments below.

Comments of the Ultra Low-Carbon Solar Alliance: Revision of the Carbon Footprint Specifications in the French Public Tenders for Photovoltaics

The French Ministry for Ecology and Sustainable Development has provided an initial draft of the specifications for the evaluation of the carbon footprint of photovoltaic modules to be used under the upcoming public tender regulatory framework defined by the 2nd multi-annual energy planning “PPE2”1.

The members of the Ultra Low-Carbon Solar Alliance, who span the solar value chain and are actively advancing carbon reductions in solar manufacturing welcome the continued inclusion and evaluation of the carbon footprint of photovoltaic modules in the tender specifications for all segments (ground mounted, roof mounted, self-consumption, technology neutral and innovation). Consistent with France’s long-time global climate leadership, the inclusion of embodied carbon valuation in the French public tenders for photovoltaics has had significant benefits within France and beyond. In addition to providing France with some of the cleanest renewable energy globally these provisions have spurred significant attention and innovation regarding carbon emissions across the solar supply chain. Companies have reduced solar supply chain emissions in response to the program, and other jurisdictions have adopted the French approach. South Korea has emulated the French approach, and low embodied carbon photovoltaics are being actively discussed in the United States. French and other EU based solar companies have seen market opportunities through their provision of solar components and modules with low embodied carbon. Companies are investing in added solar capacity in Europe, including considerations of new module capacity in France, in response to the program. There is movement within the solar industry to reorient supply chains in part to take advantage of the low carbon manufacturing available in the EU. This tremendous progress and momentum caused by France’s global leadership in requiring low carbon solar manufacturing should be built upon.

The members of the Ultra-Low Carbon Solar Alliance would like to strongly encourage retaining the bid grading according to the carbon for all segments (ground mount, rooftop, innovation). The introduction of a simple threshold value / cap / maximum value, without a progressive carbon footprint grading in the bid evaluation for the majority of the tendered photovoltaic capacities going forward, would disincentivise continued innovation and pro-active decarbonization of the European and French photovoltaic value chain. It would lead to more, rather than fewer, solar supply chain carbon emissions, and would further disadvantage French and EU solar producers in the Tender process. In view of the current life cycle inventories for photovoltaic systems published by the International Energy Agencies Photovoltaics Power System Program Task 122 , the introduction of a threshold value / cap / maximum value for the carbon footprint for the largest tender volumes at 550 kg CO2/kWp would be equivalent to a defacto annulment of the carbon footprint evaluation for PV panels. As verified by the latest data published in this report the global average carbon footprint of crystalline silicon PV panels is below the proposed threshold, and the best in class modules represent significant additional carbon savings. Data from the CRE ‘rapports de synthèse’ for CRE 4.7 and CRE 4.8 tender results for ground mounted installations2 further illustrates the inadequacy of the proposed threshold. Modules manufactured in a nation with one of the most carbon intensive grids in the world were used in 77% of the projects in the last two tender cycles 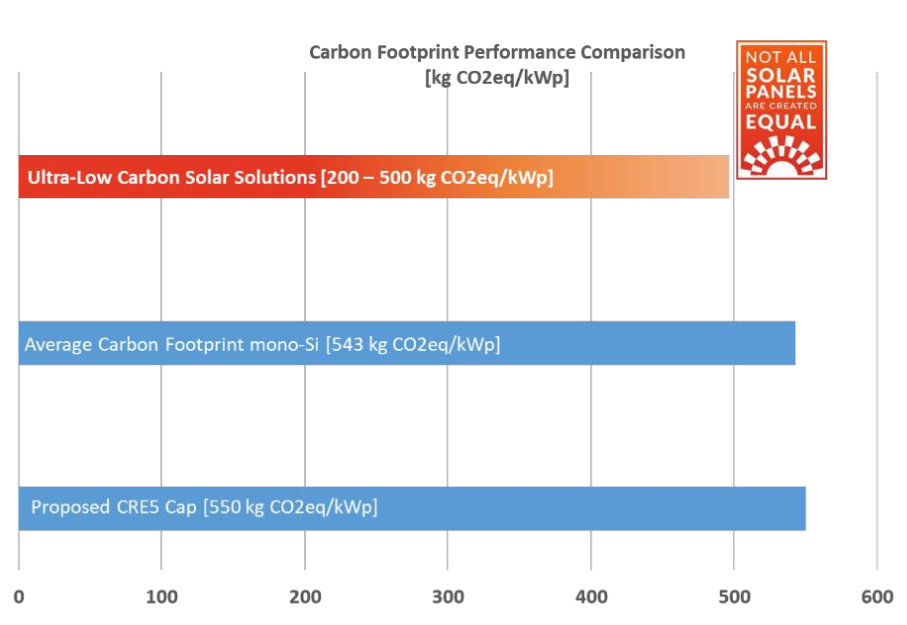 Therefore a differentiation only based on the proposed maximum threshold does not offer any incentive for innovation or energy and resource efficient manufacturing in the various steps of the value chain to decarbonize solar modules. It would set a threshold that merely reflects the current global average – and hence would lose any meaning. If the program is finalized with simply a threshold for ground mount applications, which we strongly discourage, that threshold must be set low enough to continue to drive decarbonization and innovation in the solar supply chain at a value lower than the proposed 550 kg CO2eq/kWp.

A de-facto removal of the carbon footprint evaluation would also jeopardize the French ambitions to continue to lead the European Union decarbonization efforts for the electricity sector. Decarbonizing the solar supply chain will become increasingly important as solar becomes an ever greater part of generation and more elements of the economy become electrified, particularly transportation.

With a continued decrease in levelized cost of solar electricity and an increasingly clean grid mix in France the continuation of a carbon footprint grading for all public tender volumes would lead to even better project economics on a life cycle basis, as well as increased component resilience due to the strengthening of EU and French value chains.

The Ultra-Low Carbon Solar Alliance would like to call for an extension of the proposed carbon grading scheme for the rooftop segment to all photovoltaic segments in the upcoming revision of the tender specifications under the PPE2.

PV technologies with higher life cycle CO2 emissions deployed in low-carbon electricity grids can result in a net CO2 payback time of greater than ten years, in the case of silicon PV3 deployed in France.4

For several years, the Energy Regulatory Commission (CRE) of France has been conducting an innovative call for tenders for the construction and operation of power generation facilities utilizing solar photovoltaic (PV) technology. In addition to technical and economic criteria, the tenders have included sustainability criteria in the form of a simplified life cycle product carbon footprint methodology and evaluation criteria.

Setting the pace of the integrated decarbonization of the solar value chain, France has attracted some of the most innovative players in the value chain. These PV companies embrace the concept of ultra-low carbon solar, through highly energy efficient manufacturing processes, raw material efficiency, and circular business models. They also seek to proactively decarbonize their own electricity consumption – either through renewable electricity sourcing or manufacturing in attractive, low carbon grids such as in France.

The “French Model” has since then been adopted in other markets and market segments, and the European Commission is currently evaluating the introduction of a carbon footprint information requirement for PV modules, inverters and systems in the context of the ongoing Eco-Design and Energy Labeling Supporting Study.

Moving away from continuous support of the carbon footprint criterion in the tender evaluation, by moving to only a cut off criteria, would significantly delay net carbon reductions in the French Grid mix, locking in up to 1 million tonnes of additional carbon dioxide emissions per annum. It would also erode French leadership and send an unfortunate signal to other jurisdictions at a time that we need to increase, not decrease the pace of decarbonization. The proposed modifications to the program would squander significant potential carbon savings, as illustrated by this summary calculations on the average embodied carbon of new PV systems under the proposed CRE5 framework.

1 PPE2: Seconde Programmation Pluriannuelle de l’Energie, Décret no 2020-456 du 21 avril 2020
2 R.Frischknecht,P.Stolz,L.Krebs,M.deWild-Scholten,P.Sinha,V.Fthenakis,H.C.Kim,M.Raugei,M.Stucki, 2020, Life Cycle Inventories and Life Cycle Assessment of Photovoltaic Systems, International Energy Agency (IEA) PVPS Task 12, Report T12-19:2020, December 2020, available here.
2 See CRE ‘rapports de synthèse’ for CRE 4.7 and CRE 4.8 tender results for ground mounted installations
3 Average silicon PV technology benchmark according to the IEA PVPS Task 12 Life Cycle Inventories
4 Lifecycle and Avoided Emissions of Solar Technologies, WattTime, 2020; Taking into consideration the emissionality analysis for the current French grid mix4 , and if the life cycle embodied carbon emissions of PV modules were capped to 550 kg CO2eq/kWp, as opposed to rewarding Ultra-Low Carbon Solar solutions well below that, as is now the case, it would lock-in carbon on the French grid. This would extend CO2 payback times for new PV installations by more than 15 years. This means that net CO2 benefits would start only in the second half of the of PV installations’ 30-year lifetime.